Taxi transfer Belgrade Sarajevo-As the capital of Bosnia and Herzegovina and its biggest city, Sarajevo is known for its rich offer of entertainment and various other activities. Sarajevo is also a great place to explore the region. Living space where various cultures and civilizations connect is a great way to show how important cultural diversity really is and to contribute to increasing the knowledge and value of global cultural heritage.

Walking in Sarajevo is a walk through time. From Baš Čarsija, one after the other, Ottoman, then Austro-Hungarian and finally contemporary part of the city. They say, it’s a shame that you did not get to know that old Sarajevo from good times.

For tourists, we sugest to travel whit taxi transfer Belgrade Sarajevo, and it is best to stay in the old city center. From the bus, that is, to the railway, to the Austrian Market, you will be taken by tram or trolley. From here begins dating. First meeting with Miljacka. A river that was inspiration and inspiring many artists. It runs smoothly and calmly with stone blocks, you cross it over a stone bridge and suddenly you are in Bas-Charsia. A recognizable image. Sebilj or fountain on a small square, surrounded by crafts shops, souvenir shops, delicacies and mushrooms with a mosque in the center. Through wide open eyes, it’s a little weird, like you’ve stepped back a century. The smells of mom, so it’s time for the morning, but the real Bosnian black coffee from the copper jazz with the ratluk.

At the very center are Begova, Careva and Baščarsojska mosque, a masterpiece of a part of Islamic art in the Balkans. Then there is an old orthodox church from the 15th century. Below is the old Synagogue, which has been turned into a museum of the suffering of the Jews. At the lower level, the Cathedral of the Heart of Jesus is changed, and the Orthodox Church of the Holy Trinity. And yet another Synagogue, little mosques are no more and you can not count. Pay attention to the clock tower near the Gazi Husrev-beg mosque. With such a density of religious objects it is difficult for a city in the region to boast. 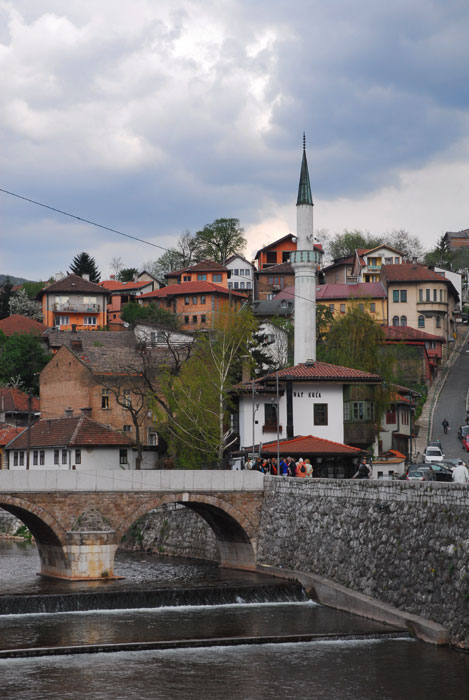